The Walk Through History Park is outdoors on the east side of Highway 40 (120 Zerex Street) just north of the traffic signal at County Roads 72 and 804 in Fraser.

Sculptor and author Jim Hoy created these works as part of his Western Heritage Exhibit.

Here's a man who really knew the West like the back of his hand. Jim Bridger was the highly regarded frontier scout who discovered the Great Salt Lake and who later established a trading post where the Oregon and Overland trails converged in Wyoming. Bridger even guided military patrols around or between warring Indian tribes during the country's westward expansion. As guide for the Berthoud Expedition, which plotted the stage route between Denver and Provo, Utah, he actually passed within sight of this plot of land where his likeness now stands.

This powerful sculpture captures the spirit of times long before Columbus set foot on the New Continent. It is a symbol of man's struggle for survival. In order to capture the huge bald eagles, Native Americans hid under pine boughs with meat on top; when the eagle took the bait, the Indian burst through the boughs and caught the bird with his bare hands. The original, wooden sculpture has been replaced with bronze. 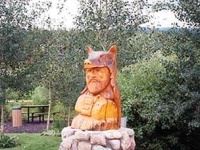 Don't mess with this legendary mountain man, called "Liver Eater" by his peers. Jeremiah Johnson waged a one man vendetta against the Crows for killing his wife and their unborn child. Legend has it that he hunted the Indians down one by one, cut out their liver, and ate it raw! Johnson's exploits are legendary: he escaped as prisoner of the Blackfeet, served with a Colorado cavalry unit during the Civil War, and became the first marshal of Red Lodge, Montana in 1888.

The elusive mountain lion best symbolizes all the wild animals of the West. Intelligent management of resources - land, rivers, and the wildlife - requires room for both nature and our minds to roam free. Man is unique, but that is not an excuse to ignore or violate the planet. Humans can't stand apart from the system - because we are part of it. This  sculpture is now located inside Fraser Town Hall.

Meet one of America's greatest unsung heroes - the black American soldier of the 1800s. These cavalry and foot soldiers often marched 40 to 50 miles a day carrying heavy packs. Following the Civil War, a regiment of black solders, the Ninth, bivouacked 20 miles from Fraser and was called upon to rescue another cavalry unit pinned down by Ute Indians at the Milk River. The Ninth took heavy casualties but broke the stalemate. The company commander was even awarded the Congressional Medal of Honor for bravery. Indians actually coined the term "buffalo soldier" due to the men's dark skin and curly hair.

Bill Cozens was a sheriff in Central City - a wild and woolly Colorado town with a bad case of gold fever. The Cozens settled into their ranch, in what is now Fraser, where they operated a stage stop and a post office. When the railroad planned to lay tracks through his meadow, Cozens sat on his front porch and shot out the surveyors' stakes. Sure enough, the tracks were moved west, giving the ranch a wide berth on their way to Salt Lake City. The original, wooden sculpture has been replaced with bronze.

Better known as "Doc Susie," this gutsy woman was one of the country's earliest female physicians. She cared for the sick and injured of this Colorado mountain town in the early 1900s. She often traveled by snowshoe through blinding snowstorms to reach lumberjacks, railroad men and women who needed emergency medical care. The original, wooden sculpture has been replaced with bronze.

Here's a bulldogging cowboy just off his horse, down alongside the neck of a steer, digging his heels into the dirt as the ground rushes by at nearly 30 miles per hour. Cowboys like this have been romanticized over the years; the reality was often hard, dirty, physical work like mending fences and chasing down strays. Still, the cowboy hat is the symbol of America, and the West is envisioned as a land not yet conquered, full of risk, and, most importantly, a landscape of freedom and unlimited opportunity.

This is the weathered face of a rancher, pure and simple, with deep lines that tell the story of the hardscrabble existence raising longhorns. Texans actually created the western version of this animal by cross breeding Spanish Criollo cattle with the English longhorn. By 1833, young calves sold for $5, and mature livestock brought between $45 and $60 at the rail head. Cattle were fattened on open range grass.

A school teacher huddles with two young students reading from their primers. One of the youngsters looks up with a bright-eyed smile, as if to say, "Oh, I get it!" No matter how crowded the wagons heading west, there was always room for William McGuffy's Primer and, later, the author's more advanced Eclectic Reader. These books were the educational foundation of America; their material ranged from spelling and poetry to stories of honesty, truthfulness, and moral education. This statue, in bronze, is placed outside the Fraser Public Library.